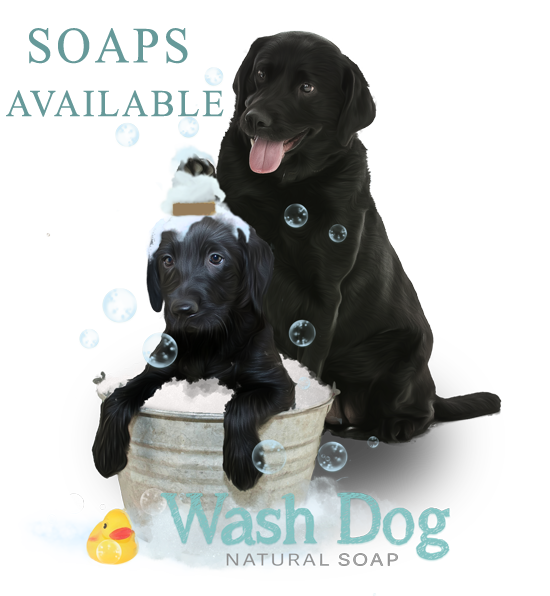 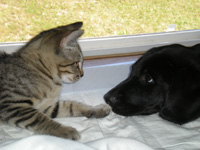 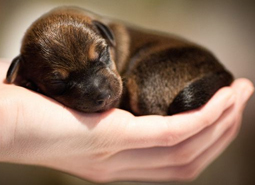 Something seismic happened in the 1980s. The so-called first designer dogs were created by a man called Wally Conron.

Wally was the puppy-breeding manager at the Royal Guide Dog Association of Australia.

A couple had asked him to breed a dog that would accommodate both the wife’s vision problems and the husband’s allergies.

He actually began with a Poodle and a Golden retriever, but people wanted pure breeds so the idea never took off.

After a lot of trial-and-error, Conron ended up breeding a Labrador and a Poodle and came up with the name Labradoodle, and a new era in dog breeding was born.

Wally retired many years ago. Now over 85 years old, he deeply regrets the decisions he made at the time, he calls them Frankenstein dogs, and blames himself for opening what he believes is the doggy version of Pandora’s Box.

Certainly the media have latched on to them. The A list celebrities have been buying these designer dogs in bucket loads. Because of that the wannabees and general public have followed suit.

What was not said when these were first bred by Wally, was that only three dogs out of a three or four litters, could be described as hypoallergenic, and only one of the pups made it as a Guide dog.

My puppy classes are full of Cockerpoos, Goldendoodles, Springadors, Puggles, Maltipoos and the unfortunately named Jackshit a cross between a Jack Russell and a Shih Tzu.

Do have I have any concerns about this craze for these crossbreeds? The simple answer is Yes!

I hear lots of people saying that mongrels are healthier than pedigrees. That may well be the case. But what I am concerned about, is not a mongrel AKA Heinz 57 variety.

What is being created often by uncaring and unscrupulous breeders, is a cross between two or more specific pedigree dogs.

These have been purposely bred and sold, often for more money that the pedigree would have cost.

That is very different from a multi-breed mongrel.

Let me give an example of what is causing concerns in a number of areas.

Crossing a Labrador with a Poodle, in that scenario you have two dogs from similar backgrounds.

Both have been bred as gundogs. The Poodle originally from Germany, where it was known as the Pudelhund. Literally meaning splash about dog, and were bred for retrieving wildfowl from lakes and rivers.

That peculiar haircut we see in Poodles, is believed to be a working cut. The hair that was left on, was there to give warmth and protection to the joints and organs. By removing excess hair then stopped the coat getting waterlogged and sodden, causing exhaustion when working for long periods.

The Labrador was from Newfoundland. Originally called the St. John's Water Dog. It was the dog of choice for the Canadian fisherman in and around the Labrador Sea. Hence the name Labrador. They were used to carry ropes across to the fishermen in other boats, and were known as great retrievers and swimmers.

Crosses that are Dissimilar 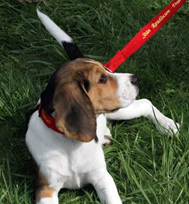 Therefore given that they were basically bred for similar tasks, it would seem like a good cross.

It is certainly a better cross that some of the crossbreeds that come from very different backgrounds.

Let’s look at a couple of examples: The Puggle, a mixture of Beagle & Pug.

Beagles were bred for hunting and are often kept in packs. People say they are difficult to Train for Recall.

They certainly use their noses constantly. The breed's history is a little cloudy, mainly because breeds as we know them today didn't really start to develop until the 19th century.

Greek documents from 400 B.C. describe Beagle-like dogs, and the Romans may have brought small rabbit-hunting hounds with them to England and bred them with the local hounds.

These are serious hunters, and have hunted individually and in packs since the reigns of Edward II (1307 - 1327) and Henry VII (1485 - 1509). There's also mention of Singing Beagles, named for their bugle like howls.

The Pug however is a very different kettle of fish. It is one of the oldest dog breeds in the world. Ancient Chinese documents state that short-nosed dogs with the description matching that of the Pug existed in China at around 700 BC.

These dogs were only bred and owned by the emperors. It was essentially the very first Lap-Dogs. They have been called the clowns of the dog world, and were bred for one purpose, to be companion animals to humans.

So here is my first concern. Dogs bred together with very different drives instincts, genetics, needs and temperament, can find conflicting emotions vying with each other. This can lead to frustration, schizophrenia and very serious behavioral problems.

Crossing dogs from one group with another group that were specifically bred for their natural instincts.

Whether that be guarding, herding, hunting, protection or just company, is to my mind a recipe for disaster.

With the Heinz 57 variety these instincts have been diluted by the multiple crosses that make up the dog.

When you cross two pedigrees, from different groups with very different drives and instincts.

You can create confusion and emotional turmoil in the resulting offspring. 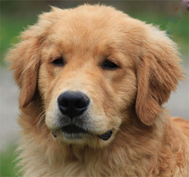 There is a dog called a Gollie. Which is a mix of Golden Retriever & Collie. A mismatch between a hunting dog and a herding dog. They have very different genetically created inclinations, instincts and drives that could easily cause conflict in the mind of these crosses.

These are the groups of dogs according to the Kennel Club. In reality the groups should not be combined, but they are for the so called designer dogs.

I have recently written an article on the importance of understanding the difference between Instinct and Intelligence. It will open your eyes to how vitally important natural drives and instinct is to each breed.

My other concern is genetic predisposition of pedigree dogs to certain ailments.

Breeders are working hard to eradicate these known medical conditions in our Pedigrees.

There has been enormous positive changes in breed specific ailments. This is due in the main to the hard work by the pedigree breeders, and a dramatic rise in health screening of both adult and puppy dogs.

Before breeding, the dogs are often tested and screened for any commonly known medical conditions. These are normally inherent and therefore known in each breed. Before the puppies are sold, a good breeder will have the pups screened for any congenital disorders. This rarely ever happens in crossbreeds.

For instance the most common crossbreed is the labradoodle. These are the common health conditions in the two breeds used to make up this crossbreed

Common Ailments in a Poodle:

Common Ailments in a Labradors:

Knowing the disease incidence in the breed, and the genetic history of the individual, is vitally important in dog breeding to have the parental dogs genetically tested for defects known to be troublesome to their breed.

Yet here we are crossing dogs with some similar health ailments, but in the main we are adding far more serious health and behavioral characteristics to one breed, by crossing these two dogs with so many different health issues.

Have a look at the internet and you will find thousands of adverts for Designer Dogs. The backyard breeders have jumped well and truly on the financial bandwagon. They are crossing every kind of dog you can imagine. Then selling them to the unsuspecting public. In many cases for more than a purebred is worth. Often without the health and behavioral checks normally done on our pedigree dogs.

There has been a massive increase in serious health issues with crossbreeds especially in poodle crosses. Many are reported as suffering from fits, eye disease, epilepsy, hips and elbows dysplasia and numerous other ailments.

I believe what is being reported by Vets and owners is just the tip of the iceberg of a health time-bomb.

I personally believe we are heading for a genetic catastrophe both medically and behaviorally.

I am in totally agreement with Wally Conron. We have let the genie out of the bottle and Pandora’s Box of horrors is well and truly open. Just look at this picture and tell me if it looks good to you? 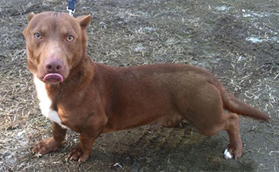 This Rami a cross between a Pitbull and a Miniature Dachshund. It was described as beautiful and a joy to behold. It is not his fault but he looks like something from a horror film. Poor dog.

The vets are now warning people of making large breeds smaller. What they are seeing is the dog suffering from their brain being crushed by the small skull it is now in. What a horrifying death to the dog. Please stop buying these mixed breeds. IF you want a mixed breed, go to the shelters.